In the usual mad rush to hit the slopes, we managed to struggle onto the bus by 8:30am with a little bit of sleep and my new coffee thermos. With a lot more snow and ice on the road than expected, the bus driver seemed rather confident. The semi-comprehensible commentary was soon drowned out by iPods.

Kate and I both thought we were going to Megahira once more, as Naoko had again done all the logistics leg-work. In fact, Naoko managed to find a ripping deal covering the return bus fare, the lift pass for the day and a discount off the rental gear. It wasn't until we arrived at Osa and didn't recognise anything that resembled Megahira that we questioned, "Where the fuck are we?" Osa, of course was the reply. Oh shit! I'd emailed Sachiko earlier to say join us at Megahira for a day of snow fun! Several confusing emails later, half in Japanese and half in English, and I still had no idea what was happening... nothing unusual there.

Madoka and Naoko strapped on their own boards, I unzipped my freshly waxed telemark skis, Fumie rented skis, while everyone else hired snowboards. Kate and Tomoko rented twin clothing, somehow not your identical twins though... Fumie soon discovered that I am not a bilingual ski instructor, not bilingual, and not a ski instructor in my mother tongue either, and that demonstrating from telemark skis doesn't necessarily translate to alpine skis. Not quite a case of Lost in Translation though. A few warm up laps of the beginner run and it was time for lunch. 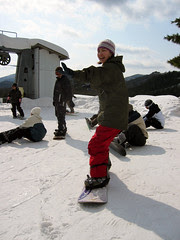 Sachiko met up with us in the cafeteria and we all munched down curries, rice and other Japanese fanfare. After lunch the snowboarders all became actors for my next movie. If you have a fast internet connection, check out the raw footage Osa snow day movie clips... I even tried some filming whilst skiing (slowly)! Madoka lost her phone and luckily, someone turned it in to lost property. Mat got a wet arse. Izabella joined the Ferrari F1 pit crew team. With some encouragement, we all headed to the summit for the long ride...
and that's where the carnage began!

After a hard day on the slopes, most of us retired to my rather empty apartment for some snacks and Sanyo warmth and a screening of Indiana Jones and the Temple of Doom. This DVD has many languages of sub-titles but Japanese is not one of them. I now wonder what is more exciting, the movie itself or the reactions from our Japanese friends watching with us.
Posted by Vernon at 7:12 pm 1 comment: 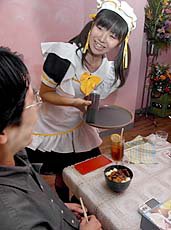 Looking local, Hiroshima otaku get a welcome home at new maid cafe situated on the map. I also plan to eat at the reputable Doma Doma restaurant soon.

Within Japan, I have:
as remainders on my tick list.

Further afield, world heristage sites have long been of personal interest. The UNESCO listing of World Heritage Sites... http://rdesai.com/ has some maps of places... My idea at present, is to stop over somehwere in China for ... about a month of adventurous travelling.
Posted by Vernon at 2:54 pm No comments:

There are somethings that just take a bit longer than expected. Like an internet connection at a new apartment for instance. I had been a karaoke virgin until 2am on Christmas morning.

On Christmas Eve, after finishing a really long stint of work, I began re-training my stomach in the art of larger portion consumption. Kemby's 100% beef burger is a welcome tummy filler. I met up with my great friends in the Opium bar, where we played the silly email all your friends "Merry Christmas" and see how many reply before 2am, game. 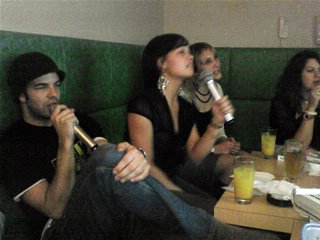 Once in Round One, of course Madonna had to be sung and I thought Like A Prayer would make a great song to murder. Kal managed a ripping rendition of Dolly Parton's Jolene. Maraccas and tambarines helped drown out some of the bad vocals and it was a really fun time. One more Japanese experience ticked off...

Apparently I got a lift home in a taxi... 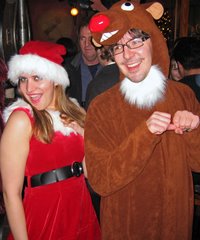 Then it was on. Wes and I rolled into Molly Malone's after our final lunchtime training session. Fashionably late doesn't seem to exist here. Our rather large group had all arrived and were eating within half an hour. Junko looked fabulous in her kimono. Kat looked vivacious as Mrs Claws and side-kicked by Dan, the Rude-off. The band played over a superb feast, a few of the Molly's staff sang a few Christmas carols and we migrated to Kemby's AM for a few more drinks. Merry Christmas everyone, I hope you had a great time - I did!

Thanks to everyone who turned up, your company was a true pleasure of Christmas for me. Thanks also to Mark and the staff of Molly Malone's for putting on a great evening.
Posted by Vernon at 2:41 pm No comments:

There's been an enormous dump of snow here in Hiroshima city these last few days and nights. I have no regret for buying some new gloves, a beanie and a scarf. After watching the pathetic Ocean's Twelve DVD at Kate's apartment, the homeward taxi was sliding all over the road while the driver insisted on practicing his English with me. 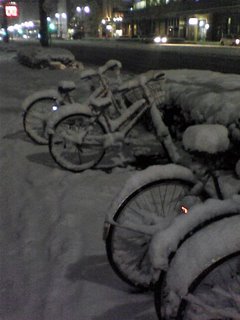 It's always interesting to see everyone's different reaction to snow and winter. A rough survey:
Manager asked us to come in to work early for Sunday's morning shift to ensure we have no delay due to the snow. As she predicted, many students phoned in their cancellations and some arrived late for their lessons. A friend was worried the amount of snow might prevent us from going to the cinema after work. 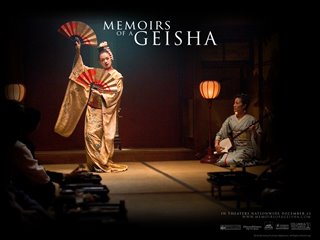 The thing I picked up from seeing the movie Memoirs of a Geisha, was that the world of geisha is art and the rest is shadows. I asked my friend what she thought of the movie and she said it made her reflect on her own life as a Japanese woman. When I asked about her past, the response was that it is secret. I've heard this before from other Japanese people too. This was hard for me to understand at first. I like to be as open and as transparent as possible. I've made mistakes, stupid ones too, embarrassed myself plenty of times and had a lot of fun in my life. I have no reason to hide anything. I'm human. The complex world of secrets and levels of sharing dependent on closeness of relationships sounds like too much hard work and trouble to me. I think I'll stop peering over shoulders to read others' phone messages though.

Now I hear that it will rain on Christmas eve. I'm still dreaming of a white Christmas...
Posted by Vernon at 11:59 pm No comments:

Madoka organised dinner on Saturday night at the Korean restaurant, Bokuden. Behind the hefty door, the wooden shoe lockers in the foyer area have these funky wooden plank keys. Excellent and tasty food in a great atmosphere. Kate's apartment break-in news was the conversation topic until Naoko was thanked for her help with the cops. I heard their mention of snowboarding the next day... 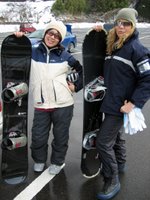 6am is not really a good time to wake up, especially on your only day off. However, the mere possibility of seeing snow coverage was exciting enough to open my eyes. I lugged my brand spanking new skis in their shiny ski bag over to Kate's. A quick cuppa there and we set out to Ajina. Our train sailed past the station before we'd realised and again, Naoko came to the rescue.

Snow everywhere. We hired some gear for Kate, bought lift tickets, then the fun began. Megahira is described as the home-like resort, which was kinda true as the snow mix had that wet, heavy, hard-pack feel about it much the same as in Australia.

The one major difference is that many Japanese ski resorts include hot springs, and at Megahira there is no fear as it is an onsen in which to wear your swimsuit. 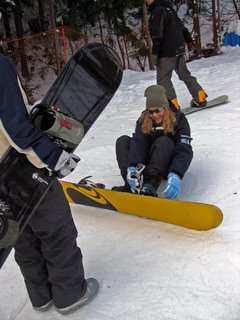 After a couple of warm-up laps on the beginner slope, I should have moved on to the intermediate slope. Instead I shoved off with a bit of speed and ended up crashing into a beginner snowboarding girl. She copped a cut lip and spat a bit of blood as I apologised profusely - I am such an idiot sometimes. Two resort guys came along and we walked her down to the medical assistance. I told Naoko and Kate, who saw the whole incident anyway, and I felt like such an arsehole. I left the beginner slope and queued up for the serious slope chairlift...

The rest of the day went without trauma. After lunch, Kate set her goal of 4 runs down the beginner slope. Her confidence built throught the afternoon and of course the addictive nature kicked in. She nailed at least 6 or 7 runs before our 6 hour tickets expired. At 4,800 yen we were all grinning from a great first day on the slopes. I tried to remember my telemark technique, but it's not hard to look cool when you're the only person on tele' skis!

Naoko was very nice and drove us all the way back to Hiroshima, all in good time for the parties we had on that night. Mine was a work Christmas party (Boonenkai) at Sesoya for all our branch teachers and staff. The food continued to arrive for hours and secret Santa presents were given out to all. My Kit-Kat addiction must be rather well known - thanks secret Santa! Beer and banter carried on into the-wee-hours of the morning.
{photos_1} {photos_2} {photos_3}
Posted by Vernon at 12:48 am 2 comments:

Frustrated and tired of being denied use of our kitchen and living room with no end in sight, I pulled out. I am certain that apartment will soon be condemned. Last Sunday I packed out all my stuff and moved to my 3rd apartment. Wes and 2 taxis helped me get all my accumulation of stuff into the new apartment. After all the hard work of moving, we deserved a couple of beers. We bumped into the waitress on her way to work and decided to walk with her to one of my favourite pubs, The Shack. The first snow fell late that night. 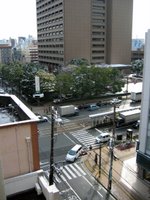 Waking up on my futon, I was most excited at the sight of fresh snow dumped on the city streets below. This view from my balcony 7 floors above is busier with people and much nicer than watching the boring shinkansen silently slipping into Hiroshima station. Though I do miss the size and how well equipped the kitchen of the previous apartment was. Standard issue here is 1 fork per person, 1 knife per person, 1 teaspoon per person, etcetera. Once again I have a tatami mat floor and for the first time, a heater / air-con unit in my big bedroom. The thin fusuma (Japanese style) sliding doors separate James' and my bedroom. Kyle, my other new housemate, can relate to problems I had in the previous apartment, as he shared an apartment with the same useless housemate 6 months ago! 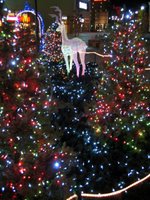 Now I just need to update my address details everywhere, inluding my alien registration card. Rent here is cheaper, my commute on the tram to work is paid for, and I don't have to eat out everyday. Maybe I can save money from this Japan experience after all! Then again, Christmas is on it's way and ski trips could quickly balance out the funds. I'm looking forward to going ice-skating and a hearty Christmas dinner. We have booked in for dinner and somehow rounded up nearly 30 people for a function that is not a recognised holiday.
Posted by Vernon at 11:57 pm No comments: