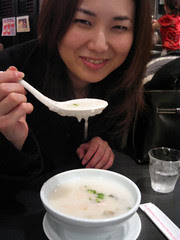 eating goul,
originally uploaded by vfowler.
Tōkyō was all wrapped up with some great Chinese goul munching in an Odaiba restaurant. A big thanks to Eriko for taking care of me in Tōkyō. It was only a short time spent there, but I really enjoyed it. This time I was well early at the airport: to avoid the insane incident (starting this holiday); and the flight was delayed for fog.

I fell asleep, staring out the window waiting for take-off. After what seemed like a brief snooze, I woke staring out into the same darkness. Have we taken off yet? Somehow an hour had passed and I'd not even realised! After the 3rd attempt, our pilot managed to make the landing. Home again in Hiroshima.

Back in Hiroshima, my Dad's 60th birthday and 2 weeks passed before we were out on the town again. Celebrating the birthdays of Emma and myself, we started in The Shack, booked out the play room there for a couple of hours, then later completed the Shack - Mac circuit. On Sunday, I ate dinner with a couple of Japanese friends in the Lemongrass Thai restaurant. Discussions there did little but confuse the hell out of me. I'm not sure which has had more impact on my subsequent thinking: excessive alcohol on Saturday or the bizarre conversation on Sunday. R U Pissed? 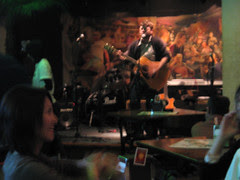 Valentine's Day was a Tuesday this year and coincidently my regular day off work - so much for scoring chocolate from any of the students! Also it was the night that Wes played his next gig. A few cheers from the Tuesday night crowd at Kemby's. Wes has groupies even though he's a solo artist! Looking forward to listening to some more tunes at the next one.

Skiing in Hiroshima after the powder dream days in Hokkaido, let's just say my hopes weren't too high. In fact, I only bothered getting 1 hour of sleep before taking the 7:15am bus to the reputed Geihoku resort. Emma Small, Naoko, Rie, Sachiko, Yukari, Satomi all snowboarding, and I (on the Tele's, of course) met up for the day on concrete hard snow. It was a good day out, but Emma Small injured herself - all in the name of fun.

Vimeo is new to me and you can now start to see some of my movie clips. So let's kick off with this one of Satomi and Yukari from the day.

And the action doesn't stop there! After skiing all day, Nikki's birthday party at Daishochu was an excellent evening, including all you could eat and drink. The tiara clad princess and great friends revelled into the wee hours of the morning. 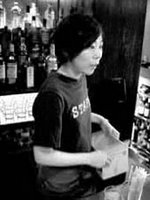 Finally in this giant catch up on happenings in Hiroshima, the Kemby's pool competition was won by no other than The Shack manager, and our friend, Tomo! Perhaps the biggest disappointment was for Marimo who plugged her 500yen to join the comp' to get only 1 strike of the cue! My personal disappointment was hearing that Marimo had quit working at The Shack. Budd also had his last night there.

My own resignation papers were handed in late last week. The cycle of change is turning once again, the end of an era is coming...
Posted by Vernon at 3:29 pm No comments: