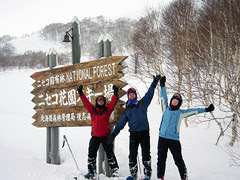 happy skiiers,
originally uploaded by vfowler.
I crawled out of bed for a breakfast without fish! Up to Pension Create I met up with Steve and Belinda also on their Telemark gear, and Kim (a.k.a. Kimiko). We imediately headed for the warmer hooded chairlifts in the Hanazono area. My gloves had taken on a foul stench the last couple of days, so this morning I threw 2 drops of Menage Adventure aftershave in each glove. The sickly sweet smell was over-kill, especially when confined under the protective helicopter-like hood of the chairlift.

Eventually the Terrain Park was opened and we let loose with tele's and turns down my favourite run. After octopus bits for lunch, we headed out for another round of survival skiing as complete body fatigue set in.

Australia Day dinner was at a new izakaya that was really a restaurant. A TV crew came in and filmed us singing Waltzing Matilda then interviewed a couple of the more famous Australians at our table.

Seicomart once again welcomed us, where we all bought cheap ice-creams. A couple of farewells and goodnights were said as we laughed at others slipping on the icy bar at the door-step. 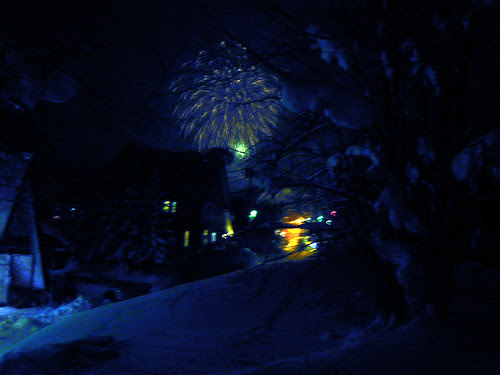 Some fireworks were launched into the night air while I stood knee deep in powder snow out the front of the hostel. I'm knackered. Time for sleep.
Posted by Vernon at 11:13 pm