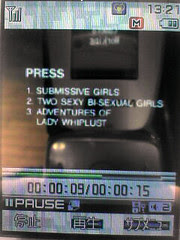 After our birthday was officially over, Eriko and I both a year older, my memory loss didn't really kick in for another 2 weeks, but I was preparing all the same. Getting lost in Tōkyō is not something I had time for, so I snapped the ticket for a safety rail, should I end up in more trouble than usual. There's always a few emergency service numbers one should have at hand while visiting the big city.

If you can't beat them, join them. Having already agreed to the alcoholic necessity for life in Japan, I went in search for what the locals might be getting into. Crazy Chicken is just the stuff - not! 15% alcohol content is possible, but the label was scaring the bejesus out of me! 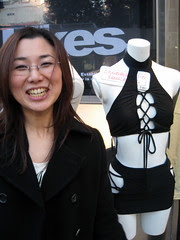 Instead of watching my wallet carefully (I'd already blown an extra 20 thousand yen on this holiday) we joined the masses and went shopping! Free things to do in Tōkyō seemed like a good idea, but somehow it just never works out that way. After a strange bite to eat, Eriko checked out this kinky outfit. Later she ended up buying a little black number as a birthday present for me.

I was rather impressed with the collection of birthday presents I scored this year. Back in Hiroshima, Emma gave me a book, Tabloid Tōkyō which reads a bit more bravely than this blog...

Japundit » Tabloid Tōkyō was the top selling "nonfiction on Japan" book at Tower Records in Tōkyō recently. The book, edited by a crack team of Tōkyō translators and editors, features translations of some of Japan’s wildest tabloid and weekly magazine articles.

Each week, the team combed the Japanese-language weeklies - lurid, quirky and irreverent - and this new book covers the past four years.

What’s inside? Stories about sex, criminal shenanigans and scandals. Japanese families - dysfunctional and otherwise - and the economy. Pets, fashion, trends and much, much more. As a picture of contemporary Japanese society, readers will find this collection often informative, sometimes shocking, but always entertaining.