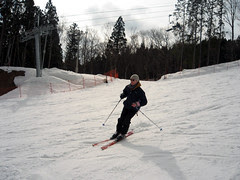 So that's why my friend Rie cancelled going skiing with me last Sunday!

Meanwhile, the conditions at Niseko, next week's destination...

The Alpen Hotel is having a Jazz Night on January 27. The evening starts with a meal and drinks at 7pm. Advance sales are ¥4500 yen per person. Always a fantastic evening - book now to avoid disappointment!

And if things are really bad, there's always the Sapporo brewery. Mmm, beer...
Posted by Vernon at 1:58 am

i just checked your blog. that is so cool. i'd like you to teach me how to make a blog so awesome =P

high fives for being the only people who blog on their blogs!! How was vacation? cold and white?