to beer, or not to beer? 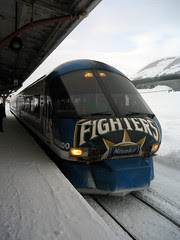 Niseko - Sapporo Ski Express,
originally uploaded by vfowler.
Shortly after my arrival in Japan, an Australian hiking friend confessed that living here turns us into alcoholics. A couple hundred sun-rises later and I'm in total agreement.

I could've easily skiied on another 8-hour ticket and called it quits at that. Instead I made the express train to Sapporo in search of the beer culture.

Out the train window, it was amazing to see the snow washing up on the rocky beach along the Otaru coast. Sapporo station is an enormous maze, perhaps a warning of what lies ahead for me in Tokyo tomorrow... 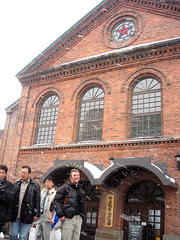 I managed to locate the beautiful red brick structures, but after 5 minutes of trudging around in the snow lined streets, couldn't find an entrance! Clambering over a fence and through a line of bushes I found myself at the taxi stand by the front door.

Here's my message to all you fellows out there aspiring to check out famous breweries around the globe: snub Sapporo off your list. Save your hard-earned and buy a slab of it instead. Not that it costs anything to wander through the beer museum; but I think there was a total of 8 words of English in the entire premises. It's more a company history and there's no tour guide even if you do speak the lingo; you don't really get any insight into the production of beer; the thing that ripped me the most was the souvenir shop at the end was rather lacking in beer related products (tea, coffee, sweets, key-chain crap, chocolate, seaweed) - some of the goods weren't even from Sapporo so I am a little bewildered as to why they were there.

A kindergarten teacher named Michiko decided she'd do her good deed for the day. In Sapporo station she guided me through the maze of restaurants, shops and citizen thoroughfares to the bus terminal. I was incredibly grateful and made the bus with only 1 minute to spare.

Thanks for reading. You've earned yourself one. So reach open your fridge and crack open your favourite brew. Cheers. Kampai!
Posted by Vernon at 11:35 pm

Heh Vern, thanks again for all your blogging help! Laura